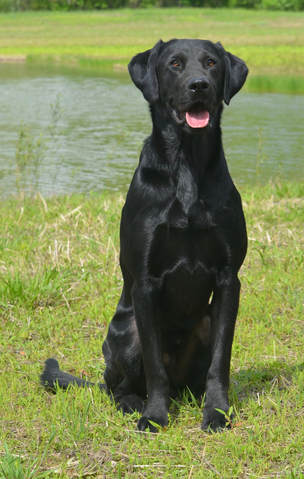 Call Name: Wally
As soon as we got Wally, we noticed that he was very special. During Wally's obedience training all he wanted to do was work and please. During formal training he caught on quickly to concepts, became a very strong blind runner and his marking was excellent. Wally matured very quickly and that allowed us to push him through the program at an accelerated rate. He is a handler's dream! We have enjoyed watching Wally progress through training. Wally is an all around finished dog and he has everything a waterfowl hunter could dream of. He is a well-refined machine in the field and during competition. He is patient, quiet and ready at a moments notice to get work done. If we had to use one word to define Wally it would be TEAMWORK!

Wally has sired multiple litters and they have all produced incredibly smart puppies. From his litter with Ellie, he has two puppies that earned titles when they were 13 months old (one HR and one SHR)! Those 2 puppies earned their HRCH, one a week after their 2nd birthday and one just before his 3rd birthday. Zeke and Brimson from this litter has also earned their UH titleS. In his 2nd litter with Kali, one puppy has his SHR. And in his 3rd litter with Hooch, Freedom earned her SHR and Bandit earned his HR when they were 17 months old. Now at 3 years old, Bandit had his HRCH and 1 master pass and Freedom needs just 1 more finished pass for her HRCH. The hunting reports we received from his litter with Hooch during their first season is like nothing we expected! They are hunting waterfowl and pheasants like seasoned veterans. All of his puppies are also turning out to be great family dogs as well!
​
ACHIEVEMENTS:
*4 for 4 obtaining his HR title at 14 months
*4 for 5 obtaining his HRCH at 15 months (currently at 790 points)
*4 for 5 obtaining his UH at 22 months
*2 for 2 in Senior Tests
​*6 master passes
*Made it to the 5th series in his first Grand and the 4th series in his second grand

HEALTH CERTS:
*Birthdate - 5/14/13
*Weight - 80 lbs
*Yellow Factored, does not carry chocolate
*OFA Hips - Good
*OFA Elbows - Normal
*CERF/CAER - clear (7/19/19)
*Clear - EIC, CNM, PRA-prcd, PRA-GRT2, RD/OSD, SD2, Hyperuricosuria, Degenerative Myelopathy, Cystinuria
*Does NOT carry the dilute gene
*PawPrint Genetic Testing - https://www.pawprintgenetics.com/pedigrees/dogs/details/8166/
​**Copies of his health certificates can be viewed in the document below**
​
He is available for stud to approved females. Please fill out the form on the Stud Services page if you are interested in using Wally.

Click on his registered name to open a new page and view his pedigree. 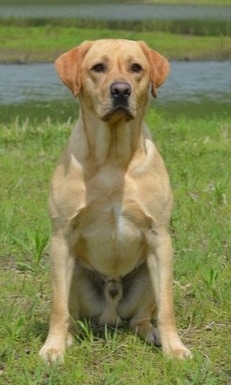 Call Name: Twitch
Twitch is out of our Kota x Ellie litter. When we decided to keep a pup from this litter, we were looking for a male, similar to Ellie. We chose Kota as the sire of this litter because he has so many of the great qualities that Ellie does. We have got exactly what we were hoping for! Twitch has his dad's blocky head as well as his smarts, and his eyes and facial expressions are all from his momma Ellie. Twitch has gotten the best traits from both of his parents. He's extremely birdie, has a strong desire to retrieve and picked up on training quickly. At 4.5 months old he was retrieving birds over 200 yards away! Twitch excelled in early training and started proving himself in the field from his very first time out. On his first hunt at 9 months old he retrieved 26 doves and on his first duck hunt at 10 months he honored his sister Hooch and retrieved many ducks. He hasn't stopped since then and now lives for hunting! He is a great all-around hunting dog and we can take him waterfowl and upland hunting anywhere and know he will succeed. His playful personality in the house makes him a joy to be around, he is laid-back and enjoys snuggling on the couch. If we could only use one word to describe Twitch it would be POWERFUL!

Twitch has sired 3 litters of absolutely gorgeous pups! One of his pups has 2 started pass and reports from all litters are the pups are extremely smart and have a high desire to work.

He is available for stud to approved females. Please fill out the form on the Stud Services page if you are interested in using Twitch.

Click on his registered name to open a new page and view his pedigree. 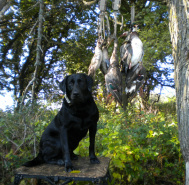 Call Name: BJ
BJ is by far the biggest teddy bear you will ever meet.  But don't let that fool you, when the ducks are flying the only thing on his mind are the birds.  BJ is 85 pounds of muscle and it shows when he's retrieving birds from big waters on windy days or retrieving a goose in a field half a mile away.  He is a sweetheart and everyone is his friend.  He is easy to train and his biggest desire is to please you.  Ask our 5 year old nephew who can get BJ to do anything that you or I could!  BJ does not reside with us anymore, but is still in the family.